The keynote and presentation highlighted AsBAA’s mission, core pillars and values, and working committees in sustainability. OEM members such as Airbus, Boeing, Embraer, Gulfstream, Bombardier, Dassault, and other manufacturers were spotlighted for their innovations in aircraft powered by SAF. Other aircraft manufacturers and AsBAA members pioneering in sustainability that were featured also included Textron Aviation, Bell Flight, Sikorsky, as well as powerplant manufacturers such as Honeywell and Rolls-Royce.

Business aircraft manufacturers have been among the earliest adopters of SAF in the industry, with the first business aircraft to make a transatlantic flight on SAF in 2011. Today, business aircraft manufacturers have continued to innovate, with some having built dedicated fuel farms for storing sustainable aviation fuel and working with low-carbon-fuel producers to ultimately achieve 100 percent SAF adoption. Other OEMs have announced multi-year agreements for the purchase of SAF to cover all flight operations, with some starting as soon as 2023. 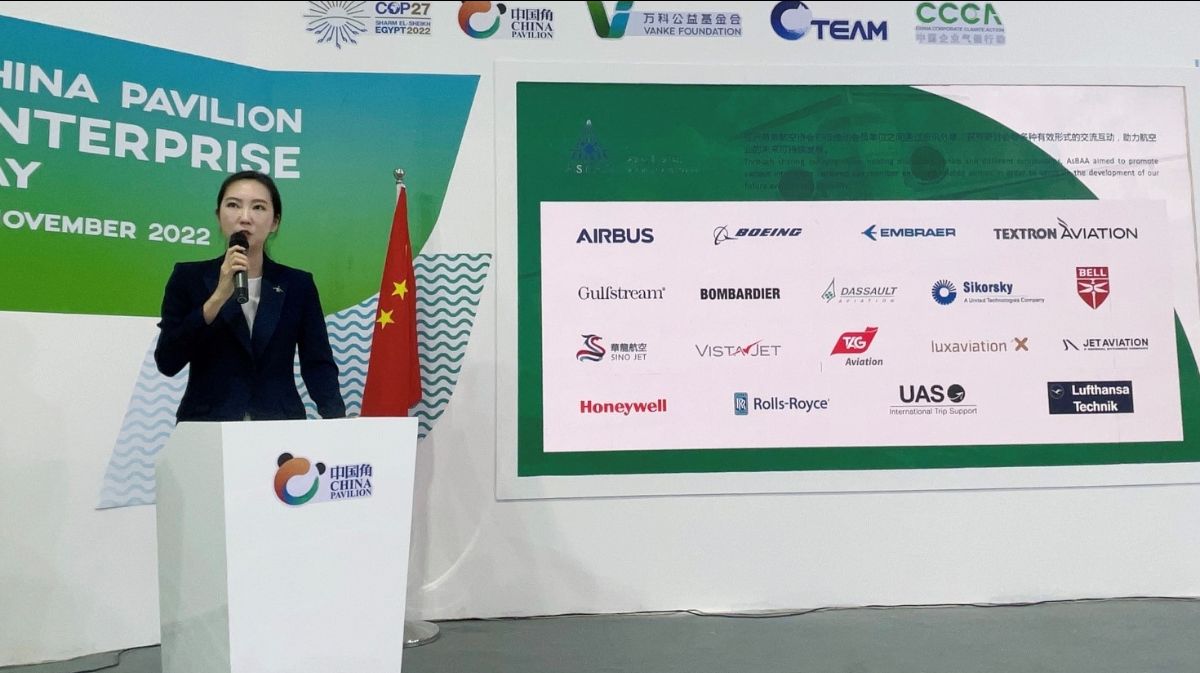 Chairwoman Lau’s address emphasized the operators’ commitment to reducing carbon emissions as well. “Besides Sino Jet, our other operator members have also been actively implementing sustainability plans, including global charter operator VistaJet, which has announced that it intends to achieve carbon neutrality by 2025; TAG Aviation, which will begin offering SAF as an option for its customers; and global commercial aviation service provider Jet Aviation, which has implemented a series of energy-saving and emission-reduction measures, including permanent SAF supply, launch of a sustainable aviation fuel reservation and claim plans, creation of facilities that meet LEED standards, and reduction of single-use plastic items. Other member companies including Lux Aviation, UAS, and Lufthansa Technik are also implementing carbon reduction measures relevant to their businesses,” remarked Chairwoman Lau.

Chairwoman Lau’s presentation further discussed ICAO, IATA, EASA, EPA, CAAC, and IBAC’s targets and commitments to decarbonization, carbon neutrality roadmaps for operators, as well as AsBAA’s recognition and excitement in seeing the wide array of earnest efforts being made by its industry members. “In the future, AsBAA will continue to monitor the industry’s progress towards sustainability,” said Chairwoman Lau. “In conjunction with our partners in government and the entire industry supply chain, we will continue to discuss the application of energy-saving and emission-reducing technologies and seek out more opportunities for sustainable development. While promoting the modernization of traditional technology and business methods, we will continue to contribute to our industry's strength to the global response to climate change.”