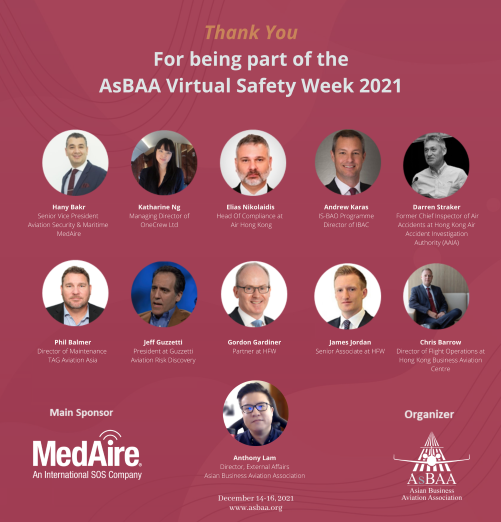 The AsBAA Virtual Safety Week 2021 was successfully hosted with over 170 unique attendees from the Asia Pacific, Europe, the Middle East, and North America. We would like to recognize our Main Sponsor, MedAire, for their strong and loyal support to AsBAA's safety initiatives. We also greatly appreciate our members and speakers who took time out of their busy schedules to share their expertise on the best practices of the industry. They are:

Additionally, our gratitude goes out to the following former government aviation accident investigators who shared their valuable insights in this event:

On Day 2 of AsBAA's Virtual Safety Week, a fatal accident involving a private airplane occurred in Alaminos City, Pangasinan province in the Philippines. A flight instructor died while the student sustained injuries.

On Day 3 of AsBAA's Virtual Safety Week, a fatal accident involving a business jet occurred in the Dominican Republic. Nine people were killed after the business jet crashed while making an emergency landing at Las Americas International Airport in Punta Caucedo. Among the victims was Puerto Rican music producer Jose A. Hernandez, better known as "Flow La Movie," as well as his wife and their child. There were zero survivors.

These tragic accidents are precisely the reason AsBAA is committed to hosting its aviation safety initiatives for the industry. As AsBAA Virtual Safety Week speaker Elias Nikolaidis pointed out during Day 1 of the event, quoting MIT Professor Nancy Leveson - "An accident where innocent people are killed is tragic, but not nearly as tragic as not learning from it." We hope everyone continues to exercise the utmost vigilance in staying safe.

AsBAA's Virtual Safety Week 2021 evolved from the Association's two-day Virtual Safety Summit and single-day "Safety Days" that were previously held in mainland China, Greater China, Southeast Asia, and on virtual platforms over the years. AsBAA will announce details on its planned safety events around the region in 2022 very soon. Stay tuned.